Évians-les-Bains and its mineral water 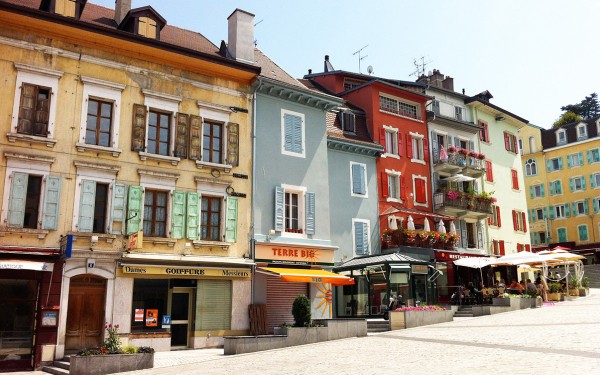 Évian-les-Bains is a beautiful town on the southern shore of Lake Geneva, on the French side. It is the most socialite seaside resort on Lake Geneva. The city has the French Alps as its stunning backdrop. The city has a wide Boulevard located along the water and there are countless boats bobbing up and down in the harbour. The center is located just behind the boulevard and has shopping streets, squares, restaurants and terraces. The city centre has many old buildings which have the late 19th and early 20th centuries Art Nouveau charm, such as the old palaces, the Light Villa and the Thermal Baths. These baths with springs have ensured that Évian-les-Bains has become famous and well-known.

The Cachat springs of Évian-les-Bains

The Cachat springs have ensured that Évian-les-Bains has become world famous. The Évian mineral water is sold in bottles in many supermarkets. In 1869 the company Eaux Minérales d'Évian was  founded, in 1878 the water from the spring was approved by the Academy of Medicine and awarded at the World Exhibition.
The Cachat spring is the most famous of the many springs in Évian and was built in 1903. The water flows with a temperature of 11.6°C. The spring is decorated with beautiful mosaic.

Évian mineral water  is still used for treatments at the Thermes d'Evian. You can immerse yourself in the fresh water and experience the refreshing effect. Book a treatment to fully relax.

There are many more sights in the city.

Évian-les-Bains is located on Lake Geneva. You can take a boat trip on the lake with a motorboat, sailboat or on the historic boat La Savoie.

The Palais Lumière is a special and striking building that was built in 1900. It is located on the edge of Lake Geneva and in the heart of the city. Since 2007, the Palais Lumière has become the Cultural and Congress Centre of Évian with annual art exhibitions.

On Lake Geneva, at the western entrance to Évian, lies the garden Les Jardins de L'eau du Pre Curieux. The garden has various water related ecosystems. The garden can be reached with Évian's solar boat.

The opulent villa in classic French style is inspired by the Renaissance. It is the former summer residence of the Lyonnais Lumiere family. This family has become very well-known because the brothers Louis and Auguste Lumière invented the camera. In 1927 this villa, with lots of woodwork, bronze, inlays and panels of silk, became  the town hall of Evian. The golden salon, which has largely retained its original décor, and the vestibule are open to visitors on weekdays.

Other attractions are the casino, the gribaldi art museum  and the church "Église de l'assomption". Also, check out the musical fountain in the marina and visit the markets which are held weekly on Tuesday and Saturday mornings in Évian. You can take a train which runs through the city to explore Évian from a different point of view.