Cotignac, the St. Tropez of the Var 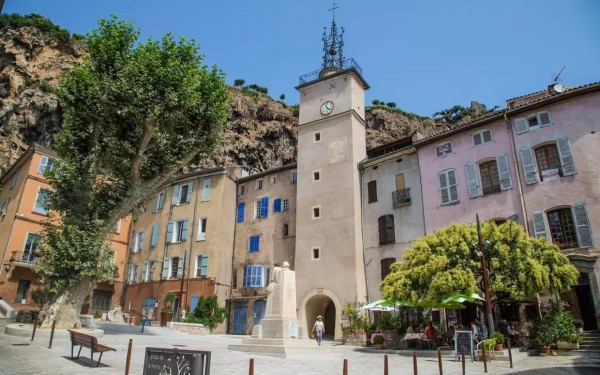 North of Toulon, just above the A8 from Aix-en-Provence to Nice, lies Cotignac. The village is located at the foot of an 80m tall rock in the Provence Verte, not far from the Gorges du Verdon. It is one of the most beautiful villages in France and is included in the list of "plus beaux villages de France". Many plan a visit to Cotignac during their holiday in France, which is also called the St. Tropez of the Var. Many artists, writers and photographers live in the artistic village. There are plenty of galleries to visit around the village square and on the small streets. Cotignac became famous due to the fact that it’s situated at the foot of a huge rock with cave dwellings and because miracles have said to be taken place here in the past. Many people still go on pilgrimage to this medieval village. The surroundings are beautiful. Be sure to go on a long walk through the vineyards, past olive trees or to the beautiful waterfall. During the summer, festivities are organized in the village.

Cotignac, worth a visit in the summer holidays!

The tall rock is like a huge backdrop for the authentic village of Cotignac. The oldest part of the village was built against the rock in the 12th century. Take your time and stroll through the charming narrow streets and alleys with beautiful old buildings. You will always end up on one of the beautiful squares with flowers and water fountains. In Cotignac there are eighteen fountains, almost all were built in the 17th century. The water in these fountains is so pure that you can drink it. The large plane trees provide the necessary shade so that you  can rest and cool off on a terrace. You’ll find the most cafes and restaurants on the Cours Gambetta. The town also has a beer brewery: La Tuf. On the Place de la Mairie you’ll find the town hall and opposite it, the bell tower with a wrought iron campanile. The Romanesque church was built in the 13th century. There is an open-air theatre, Le Théâtre du Rocher, behind the church, where concerts are held during the summer. Notre Dame de Grâces, the Saint Martin chapel and the Saint Joseph du Bessillon monastery are centuries-old religious monuments. More to the south of the village is the newer part of Cotignac. On the Place du Cours you will find shops, restaurants and terraces. Around the village there are many olive groves. There used to be fourteen olive presses in Cotignac, of which there is still one left today. This olive press has been restored and works again. 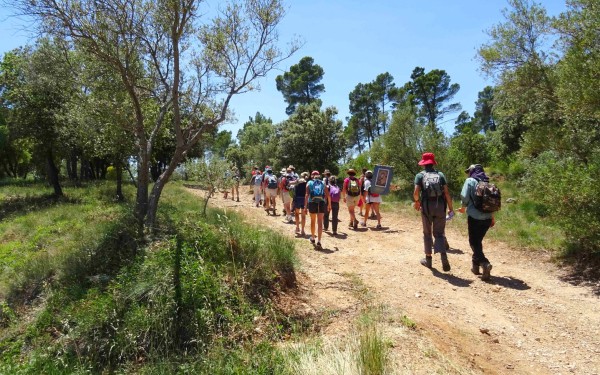 The miracles of Cotignac

It is said that miracles have happened in Cotignac. In 1519, a lumberjack would have received a vision that a church had to be built on the spot where he stood, which is where the Notre-Dame de Grâces was built. After its completion, miracles happened, even one that influenced the history of France. King Louis XIII had no children after 20 years of marriage. A clergyman gave him the task of reciting certain prayers in the church of Cotignac. Exactly 9 months after the king and his wife’s’ visit to Cotignac, Louis XIV was born. There are still many pilgrims who visit the village. They usually visit the monastery of Saint-Joseph-du-Bessillon where a second miracle is said to have taken place. In the region there was once a shepherd who was thirsty. A man named Joseph came up to him and ordered a stone to be rolled away because he said there was a spring underneath. After rolling away the stone, the water sprayed up from the spring. A chapel was built on that site, which later grew into a church and a monastery where miraculous healings took place.

The rock of Cotignac

Cotignac is characterized by the huge rock of 80m high and 400m wide: the Rocher de Cotignac. Cave houses with winding stairs were built in the rockface. You can go and visit these houses;  children especially seem to love it. Along the way you will encounter gorges of up to 50m deep. The caves were used over the centuries as a shelter where the population could hide. In times of rest and peace, the cave houses were used as warehouses and cold sleeping places for the animals.

The castle on the rock

In the  12th century, a castle was built on top of the rock with two large towers "Les Tours Sarrasines". The castle had to protect the village from the enemies. Little remains of the castle, but the remains of the towers are still clearly visible. The castle was located high above the village and served as a lookout. There were tunnels from the towers through the rock through which the soldiers could escape. From the top of rock, you have a beautiful view of the surroundings. 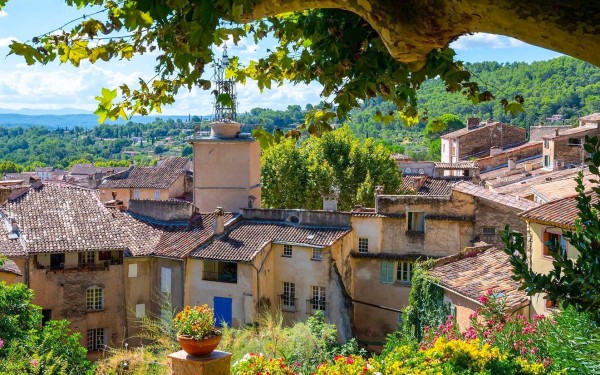 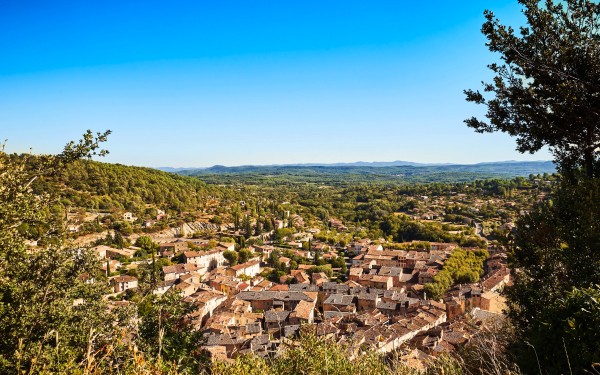 Just outside the village there is a beautiful waterfall. You can get to the waterfall by walking along Cassole River from the Tourist Office. After a walk of around fifteen minutes, you will arrive at the waterfall.

Cotignac is located near the highest mountain in the area, the Gros Bessillon. The mountain is 813m high and dominates the area.

Cotignac is located along the wine route of Provence. In the area there are many wine estates that you can view and where guided tours are given through the vineyards. In most cases, you can  also taste and buy the wine.

The market held in Tourtour on Tuesday morning is popular in the area. The large Provencal market on the Cours de Gambetta is crowded by tourists and locals alike. You can  buy local products such as fruit, vegetables, wine, oil, honey and truffles. During the summer months there are night markets on Wednesdays and Fridays. Numerous artisanal markets and flea markets are also organized.