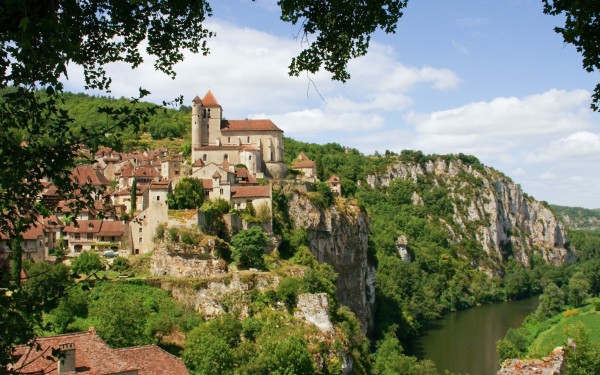 France has a list of "Les plus beaux villages de France". This list includes villages and cities that stand out from other villages or cities because they are classified as beautiful and interesting in some form or manner. Villages and cities can get a spot on this list due to their unique location, an old city centre, or for example because the walls around the medieval city are still intact after all these years. These unique places can be found all over France. Most of these places are located in the Dordogne / Lot region. Anuallly an election is held which determines the ranking of the different villages and cities. A few years ago, Saint-Cirq-Lapopie was at the top of the list. Saint-Cirq-Lapopie is a village located in the valley of the River Lot, not far from Rocamadour and Cahors. It is located in the French region of the Midi-Pyrénées called the Quercy.

The village is located on the top of a steep cliff overlooking a bend in the river Lot. This seemingly unique location for the village was chosen due to its strategic advantages. It is believed that the village was already existent and inhabited during the Roman era. During the Middle Ages, a lot of different merchandise was transported on the River Lot, therefore Saint Cirq Lapopie became an important transit point. Throughout the past centuries this region has encountered a lot of fighting. Fighting occurred mostly around strategic places such as Saint Cirq Lapopie due to everyone wanting strategic advantages over their opponents, which for example Saint-cirq-lapopie had. These strategic places used to be fortified towns with thick walls protecting the villagers from intruders. In 1580 the walls surrounding the fortified town of Saint Cirq Lapopie were knocked down by enemies, all that remained was the village itself. 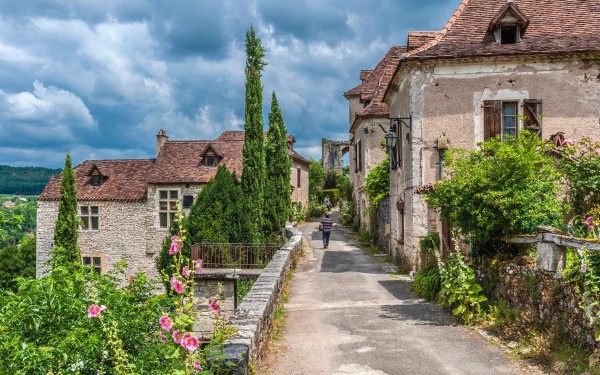 The village of Saint-Cirq-Lapopie

The centre of Saint-Cirq-Lapopie consists of narrow and steep streets surrounded by old half-timbered houses. No cars are allowed to drive in the centre of this little village so you can walk undisturbed. At the highest point of the village there is a magnificent view over the valley and the winding river. The highest point also houses numerous of Saint-Cirq-Lapopie’s most famous sights such as the Romanesque church and the ruins of a fortress. The fortress is ideally located seen as you can see the whole valley and surrounding area from it. It used to protect the inhabitants of Saint-Cirq-Lapopie form danger. Construction of the fort started in the 10th century. During and after the 13th century the fort was inhabited by three families, one of which held the name “Lapopie”. The fort fell into disrepair after the 16th century. The village of Saint-Cirq-Lapopie has approximately 200 inhabitants. Thousands of tourists visit the village during the summer. They enjoy the terraces, the old buildings and the special  atmosphere that there is in this village.

During the Middle Ages, Saint-Cirq-Lapopie was known for its guild of wood turners. These wood turners made various objects such as wooden taps for wine barrels and wooden candlesticks. These crafts were necessary for the production of wine barrels in large wine regions that were located downstream. There was a great demand for wooden barrels, presses, taps and all kinds of other wooden tools. Currently there is still a woodturner in the village. 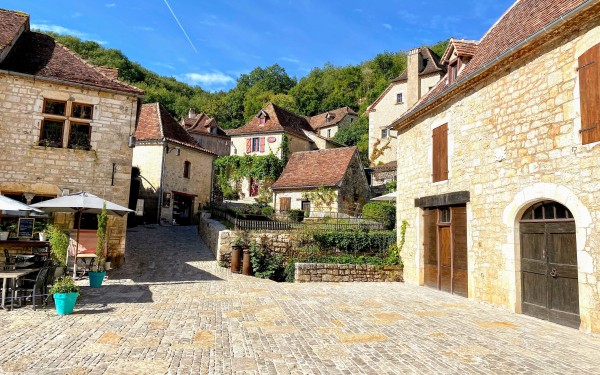 Saint-Cirq-Lapopie has always been popular among artists. In the village there are many galleries and small artsy shops. Most of these buildings are beautiful from the outside and have an even more stunning interior worth seeing for yourself!  In addition to the shops and restaurants, there is also a museum in the Maison de la Fordonne where the history of Saint Cirq is told.

In addition to the village itself, the area surrounding the village is also worth exploring. You can take beautiful walks from the village along the valley. On the west side of Saint-Cirq-Lapopie there is an old towpath which is cut into the rocks. In just under an hour you can walk to the next village along the river, the village of Bouziès. The walk to Bouzies is impressive: on one side the River Lot and on the other side the high rocks.

Book your holiday to the Dordogne - Lot