Cité of Carcassonne, the largest castle in Europe 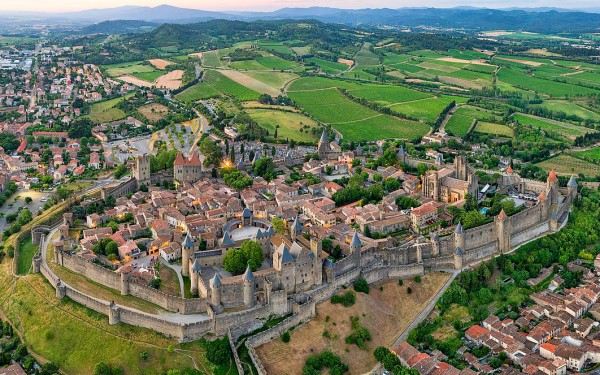 Almost everyone knows Carcassonne thanks to the world-famous castle "La Cité" and due to the famous board game "Carcassonne" which many families have and take with them when going on  holiday. Carcassonne is in the Languedoc, between Toulouse and the coast of the Mediterranean Sea, just north of the Pyrenees. The castle "La Cité" is visited by more than four million tourists every year and it is busy nearly every day of the year. It is best to visit the castle outside the high season or very early in the morning. It is one of the most visited sights in France and, together with the Eiffel Tower, the castles of the Loire and Mont Saint-Michel, one of the biggest tourist attractions in France. Be sure to take plenty of time to see all the beauty behind the high walls of this former fortified city. Carcassonne Castle has been on the UNESCO World Heritage List since 1997. The completely walled fortress is the largest in all of Europe.

Visit La Cité during your holiday

From afar the enormous castle is visible. The striking towers sparkle in the sunlight and dominate the surroundings. There are four gates and within the impressive walls lies a medieval town with winding streets and narrow alleys with medieval houses. In the middle is a square surrounded by restaurants and cozy terraces. Next to the fortress is a castle you can visit. There are also many souvenir shops, galleries and other touristic shops. People still live in the castle above the shops, there is also a hotel. One of the largest structures in the Cité is the striking Basilica of St.  Nazaire. Festivals and medieval shows are regularly held in the castle. There is also a train that goes around the Cité so that you can see everything. On July 14, there is a huge fireworks display which is worth watching. 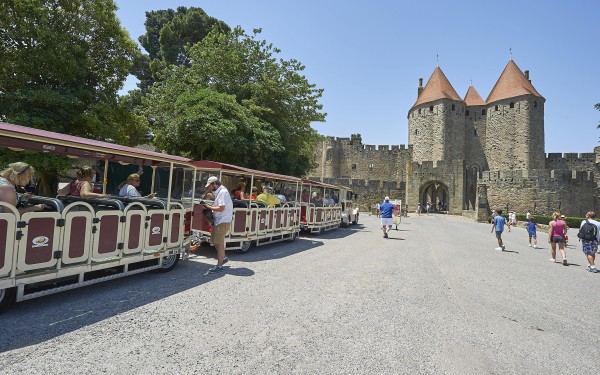 History of the Cité of Carcassonne

As with so many castles, palaces and bastides in France, the history of the Cité is filled with war and strife. In earlier times there were already settlements of the Romans in the area but the first beginning of the Cité is in the 11th century when the powerful Trencavel dynasty built the Château Comtal, the castle that still stands in the Cité. In the centuries that followed, the castle was the subject of a battle between the French king and the Count of Toulouse. At that time, the castle was heavily fortified and a second defensive wall was built. The Cité had a strategic position in the battle between France and Aragon to the south. At the beginning of the 13th century, the castle was taken by Simon de Montfort when the Cathars were severely persecuted and tortured by the Roman church. With the signing of the Treaty of the Pyrenees in 1659, peace was established between Spain and France and the Roussillon region returned  to French hands. At that time, the Cité lost its strategic value. At that time there was a flourishing cloth industry. Wealthy merchants built beautiful houses in the lower town, causing the castle to fall into disrepair. Napoleon dismantled it in 1804. From 1830 Prosper Mérimée brought  the historical importance of the Cité to the attention, after which in 1844 the restoration of the castle began under the direction of architect Viollet-le-Duc.

The Cité has four entrance gates, all of which are of historical significance:

When visiting the Cité, you may want to visit the St.  Nazaire church. In the year 925 they stared to build the church. The basilica was consecrated by the Pope in 1096. The Gothic elements were added to the church in the 12th century and over the centuries various adjustments have been made. The current Gothic elements are therefore of a later date. Originally the church was a cathedral, but from 1801 the church lost this title and it went to the cathedral of Saint Michel which was located in the lower city. In 1898 it was given the status of a basilica by the pope. A cathedral is a church which has the seat of the bishop. A church can  be elevated to a basilica because of an important relic or because it is an important place of pilgrimage. Then it may also show the flag of the  Vatican City. The current exterior was created after the restoration of Viollet-le-Duc. The stained-glass windows are still in original state and date back to the 13th and 14th century. 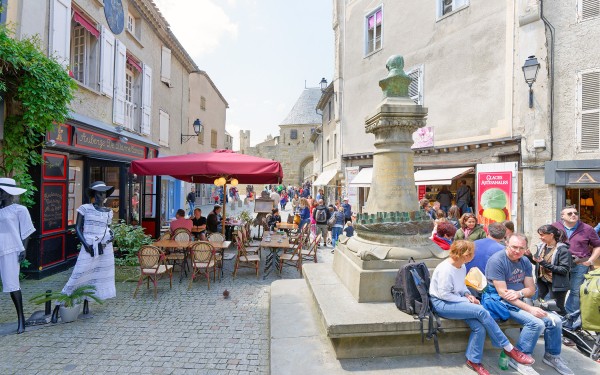 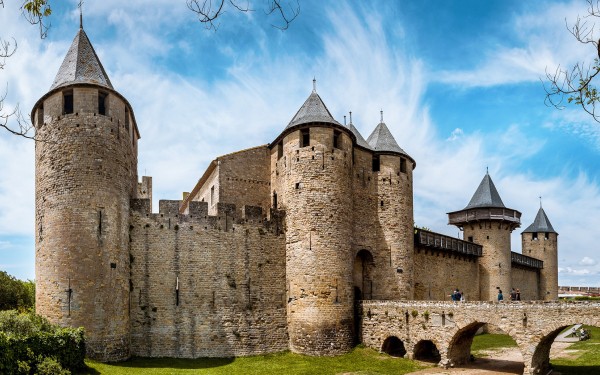 Château Comtal is the castle within the walls of the Cité. It was built on the steepest part of the hill so that it had an advantageous position against attackers. The castle is quadrangular and has nine towers. During the time it was built, it was seen as a clever piece of architecture. Two of the towers are of Visigothic origin: the Pinte Tower and the Tour de la Chapelle. The Pinte tower is the highest tower in the entire Cité. To go to the castle, you will need to walk over the bridge. You’ll also need to pay an entrance fee, but this can also be done online in advance. In the castle you can see windows that originally were in the house of Grassalio which was located in the Ville-Bas, the lower town. You will also see medieval tombstones and a sarcophagus from the fifth century. In the tower of Trencavel there are frescoes that depict war scenes between the Franks and the Saracens.

The Lices of the Cité

The Cité has two defensive walls. The space between those two walls is called the "Lices and you can walk around almost the entire castle through this gap. A full lap is about 3km. You can get on the Lices at any of the four city gates and also from the inside.

If you walk around the city, you will see wooden scaffolding on some towers and walls this creates a wider space. This is known as a bretèche and has been installed to increase the defense of the castle. The Cité of Carcassonne is one of the few castles where this defense mechanism can still be seen.

The legend of Carcassonne

There are several theories about the origin of the name Carcassonne. Some believe that it is a derivative of the earlier Roman settlement that was there. Others believe that a legend led to the name Carcassonne. According to this legend, the place is named after Carcas, a woman whose statue you can see at the Porte Narbonnaise. After the death of her husband Prince Ballak, she gained control of the castle and went into battle with the Franks who were trying to conquer the castle at that time. According to legend, she fed a bag of wheat to a pig and had the animal thrown from the highest tower towards the enemies. The enemies saw the fattened pig and therefore thought that there were still plenty of supplies in the city and that their siege would last a long time. This caused the Franks to leave and the siege was over. After their departure, the city bells rang for Carcas, creating the  expression "Carcas sonne" and that would later have become the city name.

Book your holiday to the South of France