Collioure on the Côte Vermeille 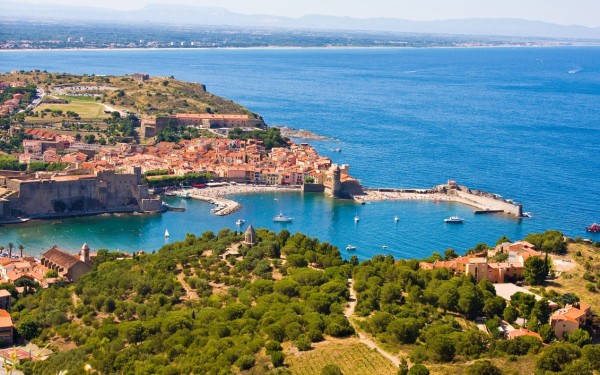 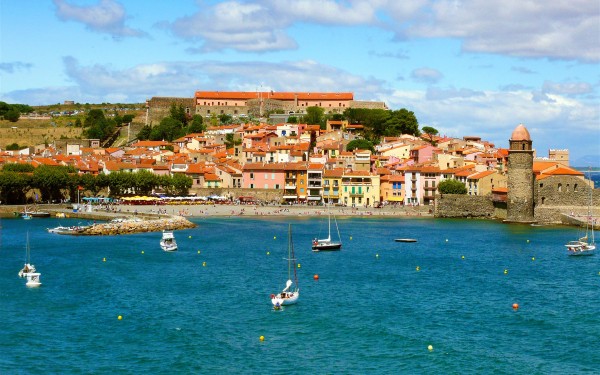 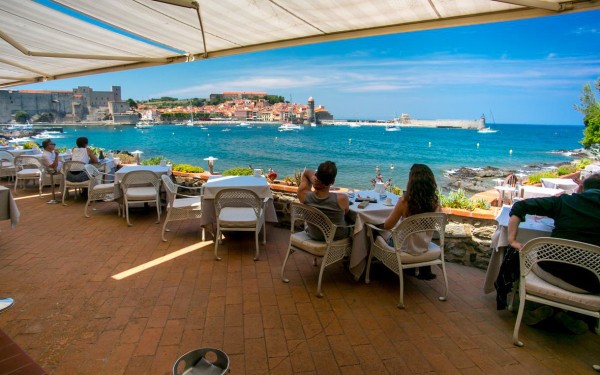 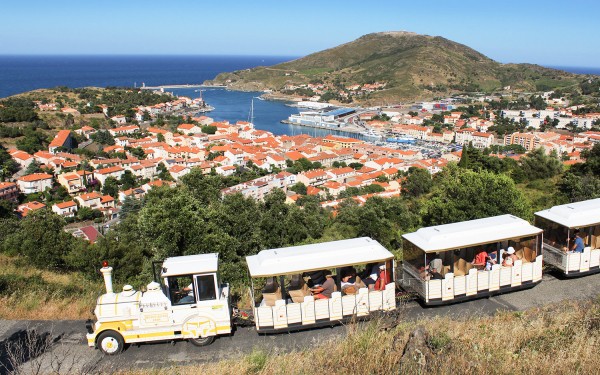 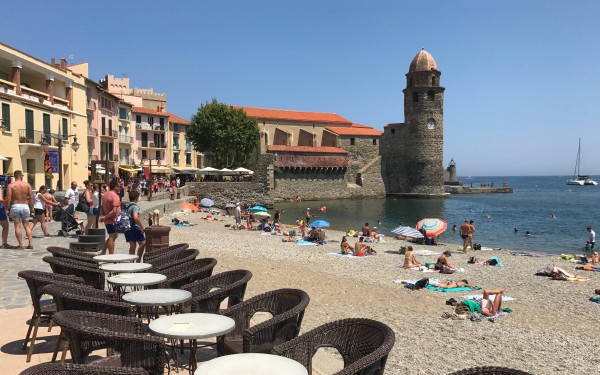 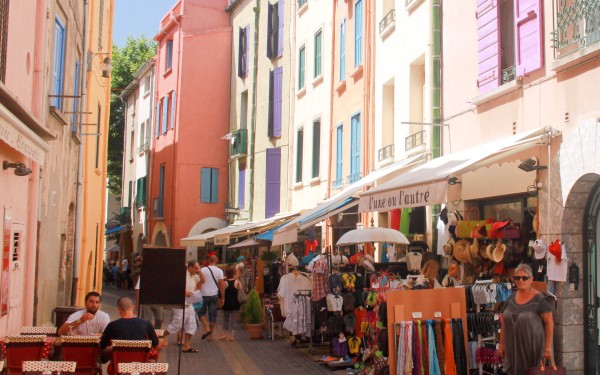 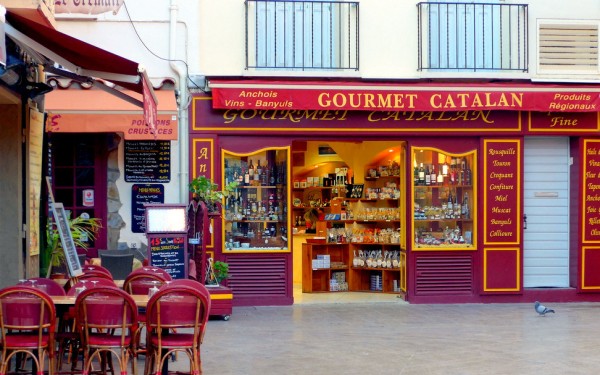 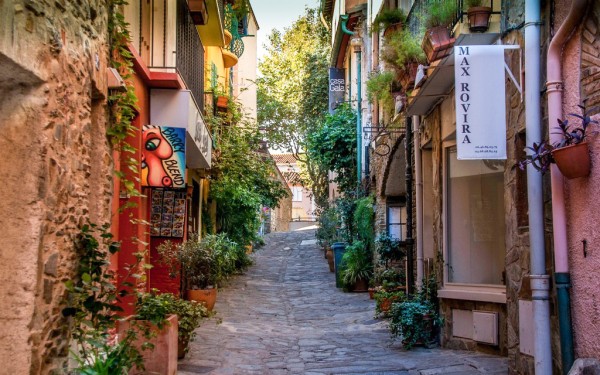 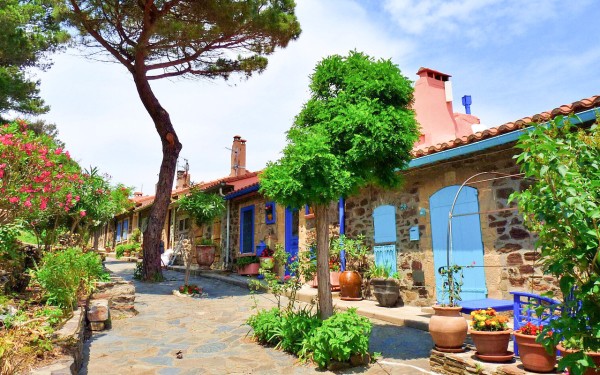 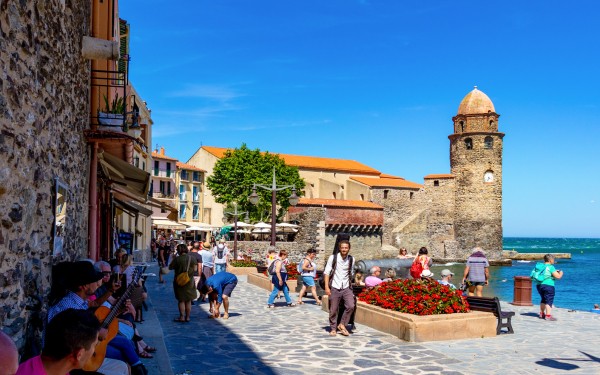 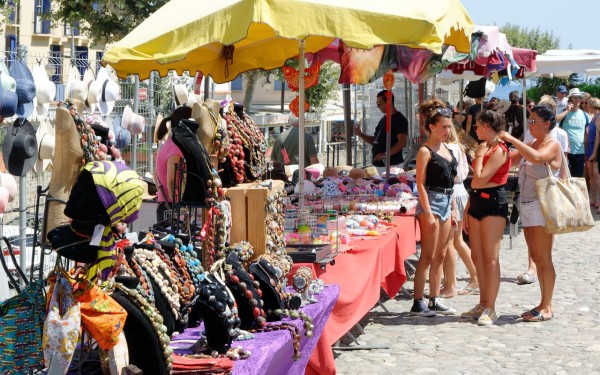 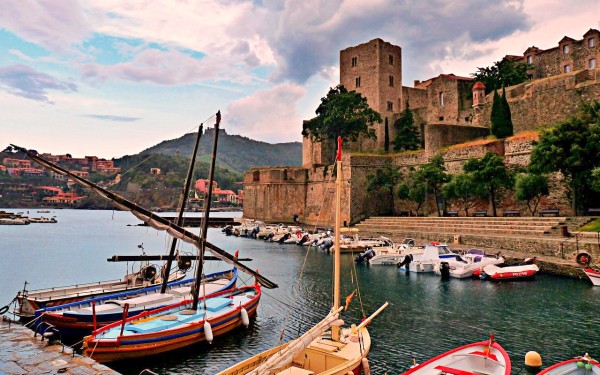 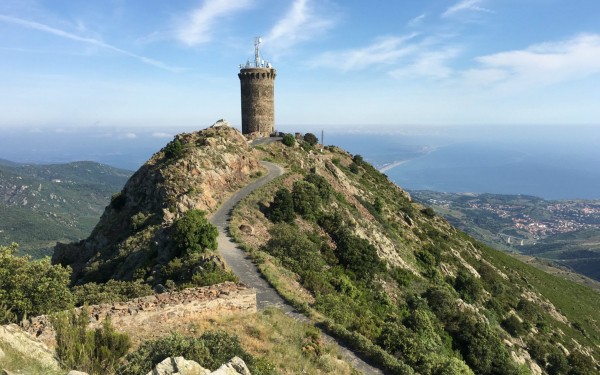 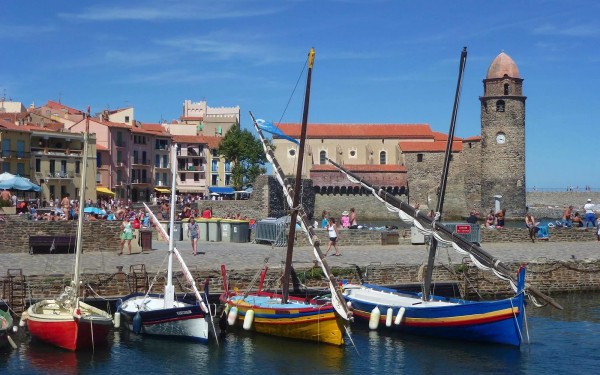 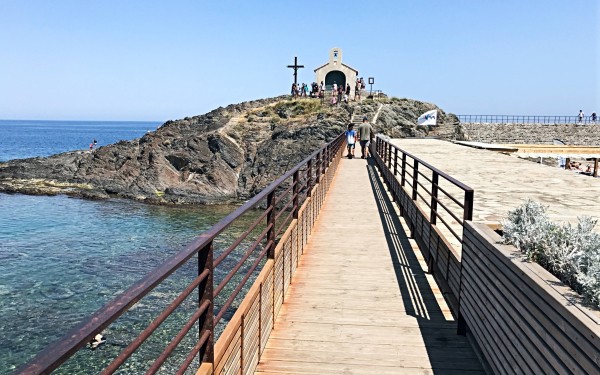 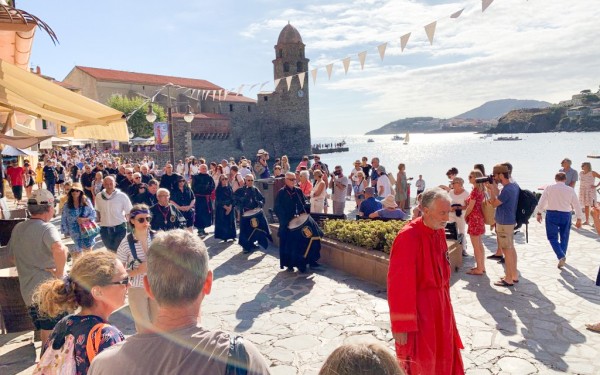 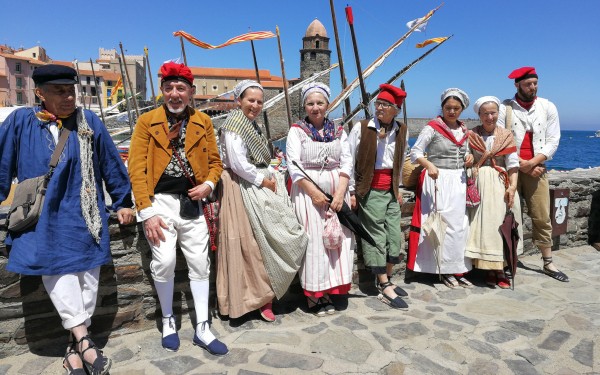 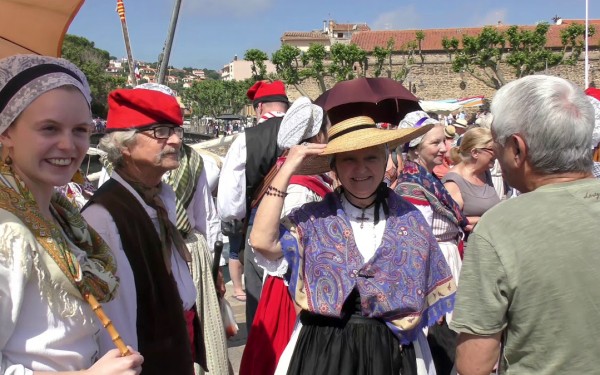 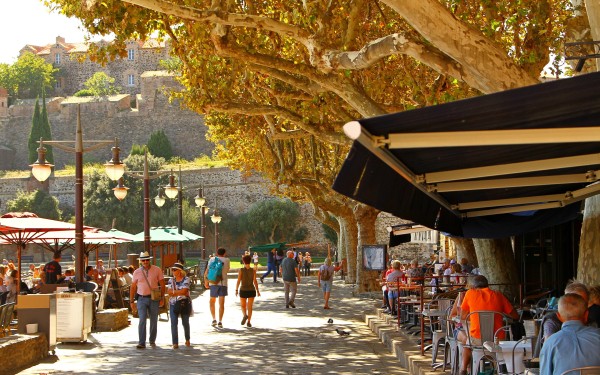 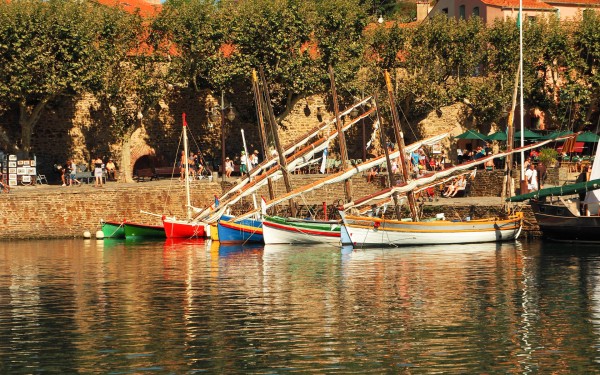 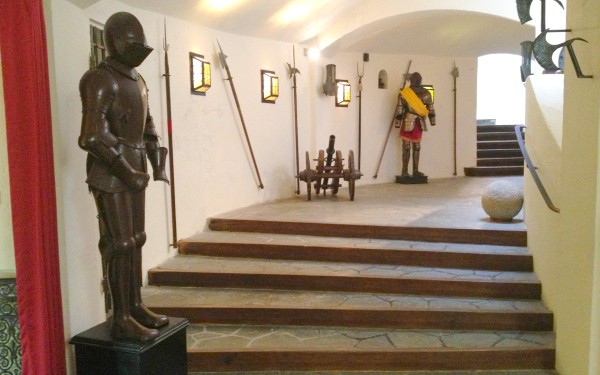 Popular holiday region on the Mediterranean

The southernmost region of France is the Pyrénées-Orientales department in the Languedoc-Roussillon region. This department, with Perpignan as its capital, is surrounded by the Mediterranean Sea in the east, Spain in the south, Andorra in the west, the Ariège department in the Northwest and the Aude department in the North.
The southernmost area on the Mediterranean Sea is called the ‘Côte Vermeille’ with the towns Collioure, Port Vendres, Banyuls and Cerbère. This beautiful coastal area is located south of Argelès-sur-mer. It is the hottest region in France with a Mediterranean climate. The sun shines for more than 300 days a year.
It is also in this area that the Pyrenees, the Albères massif, flow into the Mediterranean. The coast of the Côte Vermeille consists of rocky coves, bays, pebble beaches and fishing villages.

Collioure, pearl in the South of France

One of the most visited tourist spots in the Pyrénées-Orientales is Collioure. It is actually called the St. Tropez of Languedoc. The village has an impressive history and it is beautifully situated. It is built around a bay with beautiful blue water. More inland, the mountain slopes are covered with vineyards. There are many places of interest in Collioure: old fortresses, picturesque streets, boutiques, restaurants and terraces on the beach of the bay.

Many places on the coast are empty and deserted out of season. Not in Collioure. It is vibrant and lively all year round. In Vieux Quartier du Mouré with its narrow streets, also known as Small Montmartre, a large part of the workshops, galleries, restaurants, boutiques and bars are open all year round. The tourist office organizes guided tours in season, so you can get to know the various facets of the village. Visit the historical monuments ‘Notre-Dame des Anges’ or the royal castle.
But there is much more to do: lie on the beach, dive, snorkel, sail, go on excursions with a catamaran, horseback riding, kayaking, go with the tourist train and hiking in the area. A nice walk would be from Collioure to Banyuls. You will pass beautiful bays and impressive rocks. Throughout the year there are markets, parties, processions, street painters and sports activities. At lunch or dinner you can taste the Catalan delicacies.

The history of Collioure goes back a long way. There was already a fishing port around the year 700. Later, the city was fortified to provide protection for the Counts of Roussillon. In the Middle Ages, Collioure grew into an important port city. At the time, it belonged to the kingdom of Mallorca. The Kings of Mallorca built their summer palace in the middle of the current city and regularly stayed there between 1276 and 1344. The impressive castle is still the centre of the city and worth a visit.
In 1463 Louis XI invaded the city with his soldiers. During the following years Collioure would sometimes be owned by the Spanish rulers and other times it would be in the hands of the French. In the end Louis XIV won and from the end of the 17th century, Collioure was in French hands. Although Collioure is now of less strategic importance, French Marines are still located in the fortress above the city.
Many remains show the military influence on Collioure: the Château Royal, the St Elme fortress and the watchtowers Madeloc and Massane.

Collioure is very attractive to painters. Not only because of the beautiful location but especially the light has inspired many painters to come and paint here.
Around 1900 Collioure was ‘discovered’ by Henri Matisse. He stayed here between 1905 and 1914. The beauty of the simple fishing village attracted him. The sunrise over the Mediterranean sea ensures that Collioure turns a beautiful pink. That attracted him. That’s also the reason why the colour pink is clearly present in his works.
Many other artists came to Collioure around the same time as Matisse did. They clearly put Fauvism, the art movement characterized by bright colours, on the map. In Collioure it is still the ‘path of Fauvism’, a walking tour through the village through various reproductions.
The artists met regularly at the hotel ‘Les Templiers’. At that time it was very common to pay bills with a painting. Les Templiers still exists and is full of art.

Things to do in Collioure

In Collioure are several old historical and religious buildings that are worth a visit.

The royal castle is located in a prominent place in Collioure. It is built on a rock at the water on the same place where a Roman ‘Castellum’ (army place) used to be. The town of Collioure has developed around the castle over the years. The castle was built between the 12th and 16th century and was further expanded by the counts of Roussilon and the kings of Aragon. Around 1300 the kings of Mallorca lived in it.
In the 15th and 16th centuries, during the time of Charles V, the castle increasingly became a military fortress to protect the region.
Around 1670, the castle was radically changed by the famous French engineer Vauban. Vauban was specialized in building fortresses and defences throughout France. The walls were raised and 3 bastions were built.
At the end of the Spanish Civil War, the castle was converted into a prison in 1939. The castle is one of two remaining medieval royal castles in France. The other castle is Vincennes in Île-de-France. The castle has gained worldwide fame due to painters having portrayed the castle often and from different angles.
Nowadays cultural events are organized in the castle. There are theatre and dance performances, exhibitions, fairs, shows and concerts. There are daily guided tours.

On the north side of the bay of Collioure is a small pier in the sea. This pier goes to a rock that used to be an island. A small church has been built on this rock: Chapelle Saint Vincent. Legend has it that this is where, in 303, St. Vincent was tortured and murdered. This chapel was built around 1700 because remains of St. Vincent are said to have been found. They wanted to keep it in this chapel. The Chapelle Saint Vincent is a simple rectangular room with a curved gate.
Every year in Collioure from August 14 to August 18, a party is held in honour of this Saint Vincent: Fête de la St. Vincent. During those days there are processions, brass bands, markets and all kinds of games for young and old.

The mill of Collioure

South east of Collioure, towards Port Vendres is an old mill. It was built in 1337 when the Kings of Mallorca were in Collioure. It is probably the oldest mill in Roussillon. At that time, the mill was used to grind grain, later it became an oil mill. The mill was restored in 2001.

In the past, some fortresses were built to defend Collioure. Fort Miradou lies to the north of Collioure and Fort St. Elme to the south. Both fortifications were built in the time of Vauban. Fort St. Elme is particularly fun to visit, especially for children.
Fort St. Elme is built in the shape of a star, on top of the hills of Collioure. There is a beautiful view of the surroundings and the sea from atop the fort. There are several ways to reach the fort: on foot from Collioure, by car and parking it halfway or with the train that takes you from Collioure to the fort. In the fortress you can see the weapons from the Middle Ages and children can dress up as knights.

In Collioure there are many restaurants with cosy terraces. You can enjoy the regional dishes. Collioure has been called the capital of anchovies. Even though they are no longer caught by the local fishing fleet, Collioure is still known for it. Anchovies are on the menu at every restaurant in Collioure.
Another specialty is ‘Le Croquant’, which is a cake with grilled almonds or pieces of chocolate.
A lot of wine is grown in Collioure and the surrounding area. The winegrowers in the village are allowed to use the name AOC Collioure. This means that it meets certain quality requirements. From 1971 the red Collioure has the AOC, the rosé since 1991 and the white one since 2002. The grape varieties Grenache Noir, Mourvèdre and Syrah are particularly popular.

Book your holiday in the area of L'Espinet