Test: how well do you understand a French menu? 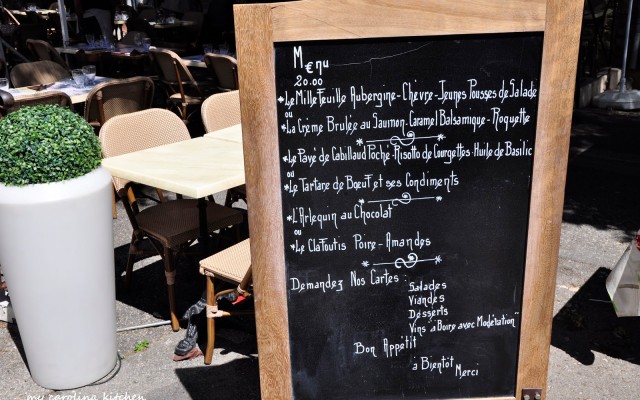 You have been in France for years and without a dictionary you can also save yourself in a bistro or restaurant. Do you know what these dishes and culinary terms mean?

1. The appetizer of the day is a velouté de potiron - what is it?
a) fish mousse
b) lean pork with a sauce
c) creamy pumpkin soup
d) salad with vegetables from the vegetable garden

3. A dish has the addition (à la) forestière? Which ingredient can you expect?
a) tomatoes
b) mushrooms
c) shrimps
d) wild

4. You feel like a piece of red meat. What should you choose?
a) une andouillette
b) travers
c) une bavette
d) une escalope

5. Parmentier de canard, what is that?
a) Duck breast with Parmesan cheese
(b) a puff pastry meat pie
c) duck under a layer of potato purée from the oven
d) a pasta dish with duck

6. On the wine list you can see wine by bottle, by pichet and vin à la ficelle. What does that mean?
a) wine in a narrow decanter
b) an extra small glass of wine
c) you pay as much as you have drunk
d) as much wine as you can

7. You are looking for a dessert with chocolate, what should you choose?
a) millefeuille
b) un moelleux
c) une crème brulée
d) un Paris-Brest

1c. Velouté is an indication for a creamy soup with crème fraîche and egg yolk added. Potiron means pumpkin and a well-known variety is velouté de potimarron, a smaller type of pumpkin that tastes a bit like chestnut.

2b. Suprême de poulet ('the best part of the chicken') or the even more elegant sounding supreme de volaille simply means - and sometimes disappointingly - that fillet has been used in the dish. Very often it concerns fried pieces of chicken fillet (blanc de poulet) served with a cream sauce.

3b. The addition forestière - 'from the forest', le forêt - can often be found on the French menu. To explain the ingredients of a sauce, a savory crepe, an omelet or even a cheese fondue. It is in any case about mushrooms and usually also about bacon.

4c. La bavette is a long-cut piece of beef, often served with fried onions and fries. So you have to have it. Les travers (spare-ribs) are from the pig, just like the andouillette, a sausage with rather striking ingredients. The escalope is usually of veal (veau), but it can also be a thinly cut piece of turkey (dinde), chicken (poulet) on even fish (poisson).

5c. Parmentier is a well-known name for an oven dish with meat under a grilled layer of mashed potatoes. Often it is duck confit, but a hachis parmentier (with minced meat) or parmentier de poisson (with fish, often kabila) also exist.

6c. Vin à la ficelle means that you only pay for what you have drunk from a bottle. This measures the operation by keeping an inch or string (ficelle) next to the bottle afterwards.

7b. Un moelleux au chocolat - also called a mi-cuit - is a chocolate cake whose inside is still liquid (see our recipe here). Une millefeuille is a kind of tompoes, crème brulée is the famous dessert of vanilla cream with a crispy layer and Paris-Best is a tartlet of prune custard filled with praline cream.