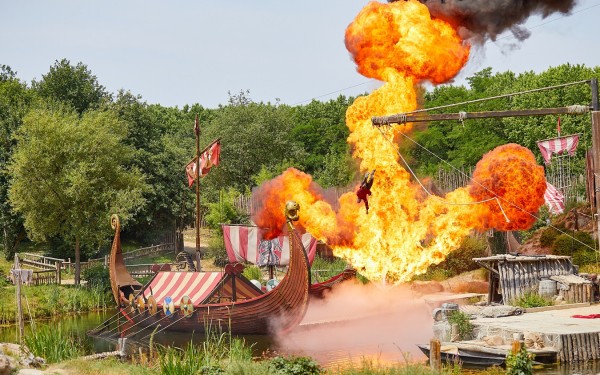 Puy du Fou can best be described as a theme park that brings important periods of history to life. Thousands of people participate in the many shows in which they re-enact historic events. The focal points are the Romans, the Vikings, Joan of Arc, the three musketeers and the regional hero General Charette from the Vendée.
In between the performances you can explore the small villages which each represent a different time period. The villages have shops and inns in the style of their époque (period) and host demonstrations of their typical crafts such as stonemasons, basket makers, bakers. The theme park is like an open-air museum where you can also buy beautiful things.

Everything shown in Puy du Fou is real, the park doesn’t use fake decors or cheap effects. The park wants to show history in an authentic way. The fact that there are no roller coasters and darkrides also has an advantage: the wood-rich park has no queues. Guests walk from one show to another and can spend their time between shows in the gardens of La Vallée Fleurie, the wooded area, in a medieval village or in a historic town.

See below an overview of the shows which shows you just how huge and grand the park is. It is not possible to view everything in one day. 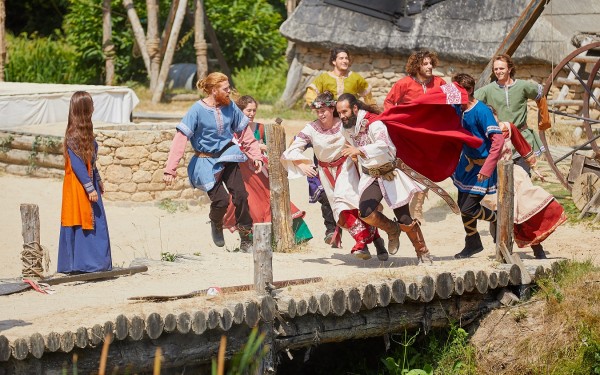 A great show to watch is Les Vikings. These barbarians attacked settlements along the European rivers in the 9th and 10th century. The show shows how locals are celebrating a wedding when the Normans arrive on roaring horses and storm into the village. They set fire to a barn with torches. A Viking ship rises from the river and warriors jump off board and sow death and destruction.
Then, however, the sarcophagus of St.  Philibert, an abbot who died in 684, arises from the water. He steps ashore, calms the Normans and restores peace to the village.

The largest bird show in the world. Set around a story of Princess Eleanore and her friend Eloise, a total of no less than 200 birds of prey appear from nowhere, you will have never seen anything like it. Also fantastic for children!

Acrobatics on horses, fighting, dancing, music and much more is what it’s all about at  the knight show Le Secret de la Lance, which is set in a castle. Very spectacular and popular among the children. 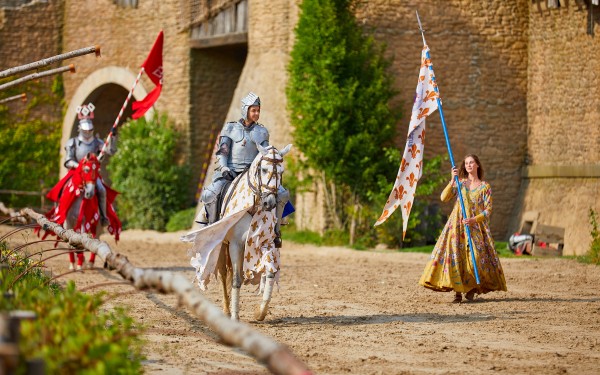 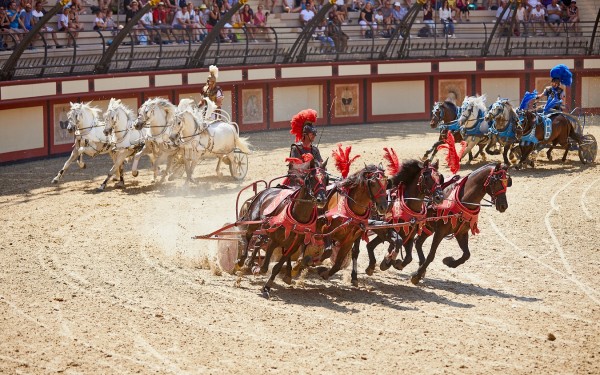 The show Le Signe de Triomphe takes place in the large Roman arena. This arena resembles the Colosseum in Rome. Gallic prisoners fight for their freedom against gladiators. They race chariots against the Romans, and they are attacked by lions and tigers.
A great spectacle that is a must-see for every adult. For small children, however, it's pretty scary. Throats of Gauls are cut, and the sounds can be quite scary for youngsters.

Mosquetaire de Richelieu is performed in an indoor theatre. Before the show a comedic piece involving the audience is performed. The show itself shows sword fights, horse riding and Spanish dancing. The show has beautiful décor which constantly changes. The show ends in a water spectacle...

From June to September, one of the largest water and fire shows in the world takes place on Friday and Saturday evenings. This "Cinéscénie" is a wonderful end to your journey through time at Puy du Fou. More than 1000 actors participate in  this show, 4000 costumes  are used and more than 300 pieces of fireworks. You will need to book this show in advance.