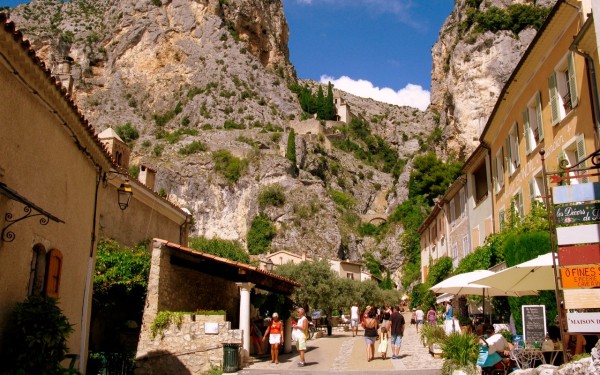 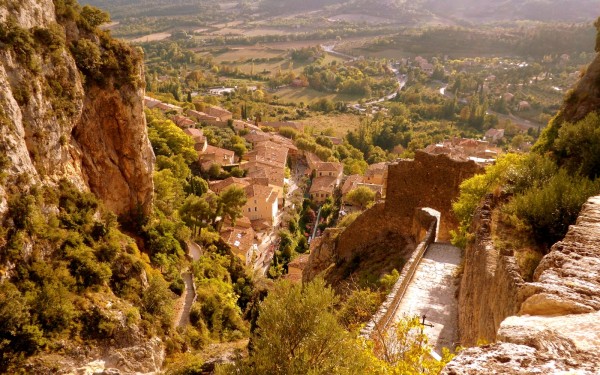 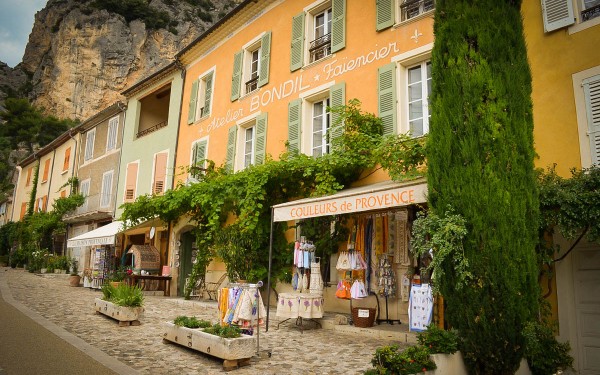 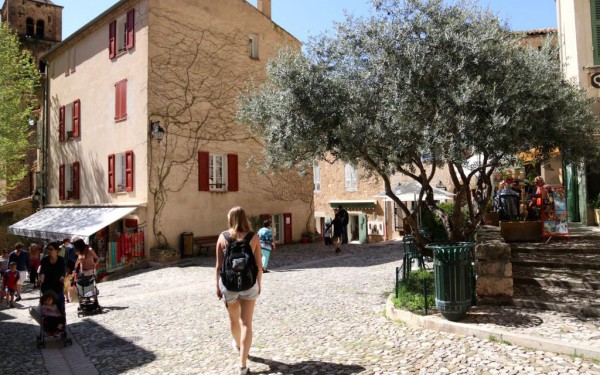 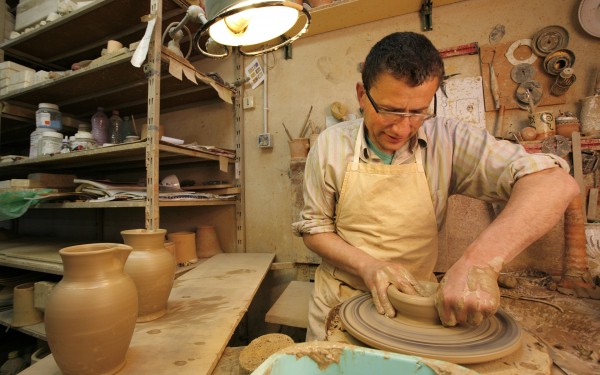 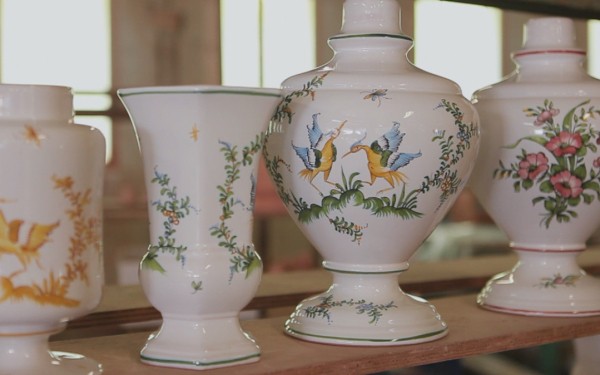 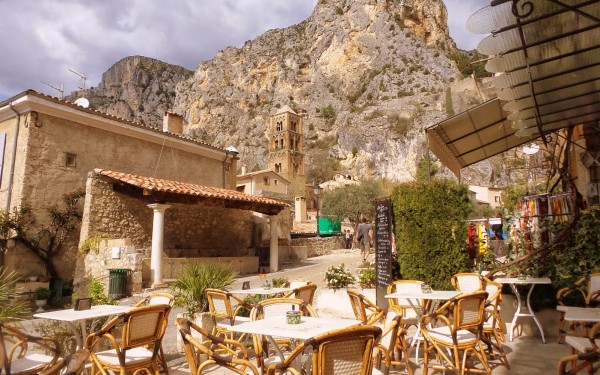 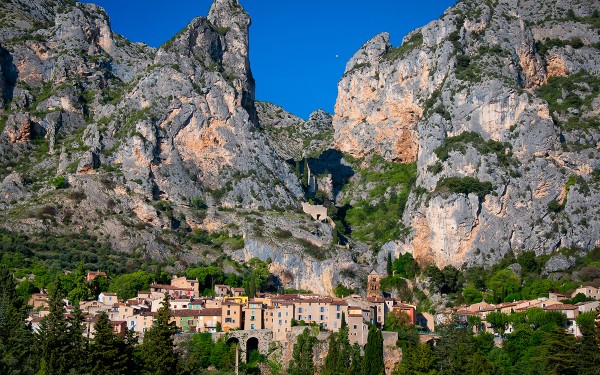 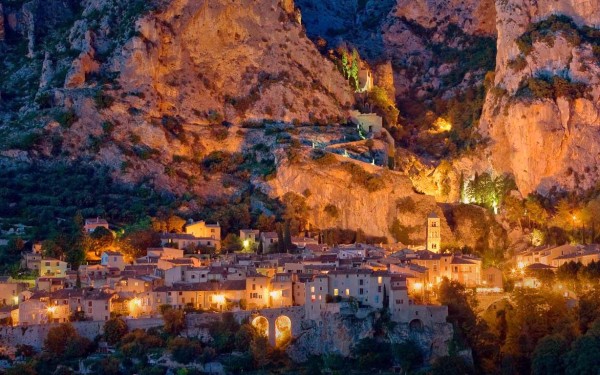 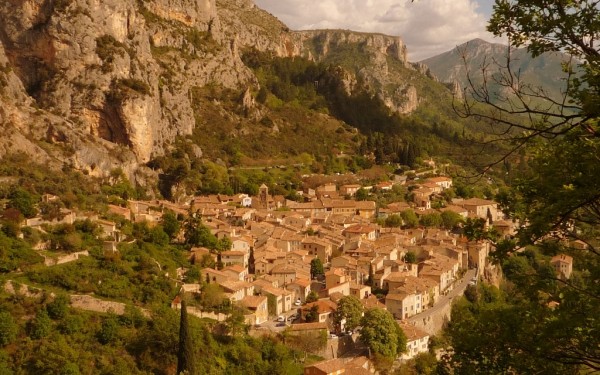 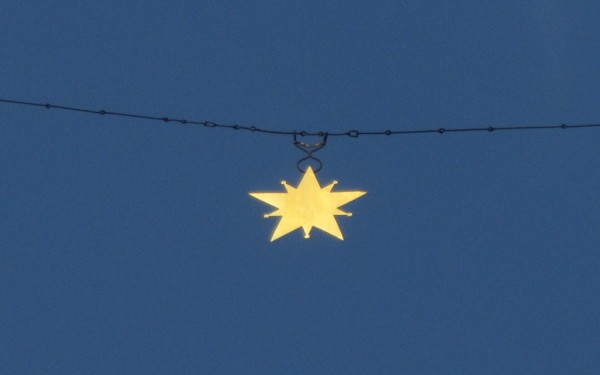 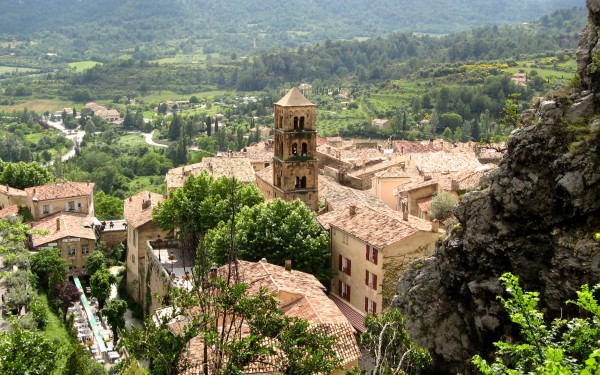 Moustiers-Sainte-Marie is a beautiful village in the department of Alpes-de-Haute-Provence and easy to find. It is already indicated from a great distance with signs. The best thing is to arrive from the south on the D957. You then pass the Lac de Sainte Croix and cross the bridge over the Verdon. You then have a magnificent view over the lake and the gorge through which the river flows.

The village of Moustiers-Sainte-Marie is the epitome of Southern French charm. It is clearly Provençal: lavender scent that meets you everywhere, picturesque squares and alleys, terraces under plane trees and houses covered with terracotta roof tiles. Moustiers-Sainte-Marie has been a place of sticking and refuge for centuries. It is built on an elevation, in the shadow of an impressive rock, and is the crossroads between the Valensole plateau, the immense Lac de Sainte-Croix and the inhospitable Gorges du Verdon. According to experts, one of the most beautiful villages in the region.

The bell tower of the Église Notre-Dame-de-l'Assomption towers above the village, a magnificent example of the Lombard-Romanesque style. The church dates from the twelfth century. Special is the altar, with a sarcophagus from the fourth century, with a picture of the passage of the Israelites through the Red Sea.

Above the village, in the middle of the high cliffs, stands the Notre-Dame-de-Beauvoir chapel, a chapel east of the village, between the rocks. The church carries its old Lombard tower, one of the most beautiful in Provence. It dates back to the 12th century and was one of the three moving bell towers in Europe. This beautiful structure can only be reached on foot in about twenty minutes via a road of the cross along a paved slope of 262 steps. Once upstairs you have a beautiful view over the roofs of the village and the valley.

Moustiers is sometimes called 'the village under the star'. A golden star hangs between the two steep rocks. According to the most common legend, this one was hung by a crusader, the Duke of Blacas, who was captured by Arabs during his journey to the Holy Land and promised to erect a monument for Mary when he would see his village again.
according to others, however, the star would have been hung in memory of two lovers of hostile families who, because of their love, would have put an end to their lives. Although there are many versions about the origin of the star, none has been confirmed to date. The mystery about the origin and meaning of the star over Moustiers remains

Thanks to its special location, and its beautiful old streets and alleys, many tourists can find this beautiful village every year. The village is cut in half by a narrow gorge with a stream, coming from a source in the hills behind the village. Here and there in the center you will find cozy little restaurants, and almost all the facades have the necessary flowers to bring color to the streets. On the weekly market you are at the right address for many regional products and delicacies.

The village is known for its pottery, the so-called Faience. A monk from Faenza in Italy taught a local potter, Pierre Clérissy, in 1668 the secret from the east for making stannifer ceramics. There was a tradition. The actual production was only started in 1689 with white-blue crockery. By 1710, the Berain decoration was created. Then heyday started.
Later this industry was shown a decline. In 1874 the last factory closed. In 1927 Marcel Provence allowed the art of ceramics to flourish again.
The heyday of this industry is long gone, but you still find in Moustiers a real ceramics museum and no fewer than twenty workshops. In the streets there are also many shops that offer this pottery.