Niort and the legend of the bronze dragons 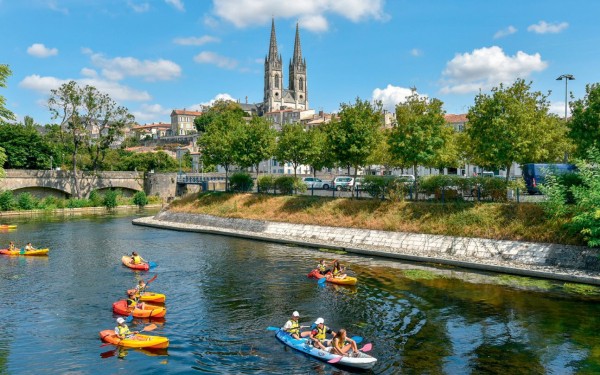 Niort is also known as the Green Venice. Niort is the gateway to the Marais Poitevin, a huge nature reserve which stretches from Niort to the Atlantic coast. After the Camargue near Marseille on the Mediterranean Sea, Marais Poitevin is the largest wetland nature reserve in France with tens of thousands of tourists every year. Many tourists take time during their vacation to visit this area.
The city itself is located on the banks of the river Sèvre Niortaise and is known for its unique and iconic Donjon, the beautiful market halls, the old houses, stunning churches and the 16th century former town hall called the "Pilori", also called the pillory. There are four bronze dragons in the main shopping street. There is a legend from the 12th century which tells the origins of the dragons. Who defeated the dragon? Niort is most definitely worth a visit during your holiday in Poitou-Charentes in France. Take a stroll through the beautiful shopping streets and past the cozy terraces.

A large part of the city centre is car-free seen as the countless narrow medieval streets have tool little space for cars. This ensures that you can walk around safely through the city. Walk past the half-timbered houses from the 15th and 16th centuries on Rue Saint-Jean and Rue du Petit-Saint-Jean or pas the hotels with beautiful facades, such as the Maison de la Vierge and the Pilori. There are plenty of bars and cafes with terraces in the old town where you can rest and have a drink.

Niort’s market halls are worth visiting during your holiday in France. The beautiful hall of metal and glass was built in 1869 and is located diagonally opposite the Donjon. Over 100 entrepreneurs sell their fresh products in the market halls six days a week. Every morning from Tuesday to Sunday the market is open and there is a large market on Thursday, Saturday and Sunday mornings. The market offers a very wide range of fresh products: meat, charcuterie, cheeses, fish, fruit, honey, fresh bread, vegetables and pastries. The market hall has a very lively, friendly and happy atmosphere. The market hall is surrounded by cozy terraces which look out on the Donjon.

Niort is a great place to shop. There are boutiques and galleries the old city center and in the shopping streets there are larger shops. Go to the "shopping malls" in the outskirts of Niort. The inhabitants of Niort also like to go to La Rochelle to the luxury shops and shop there. 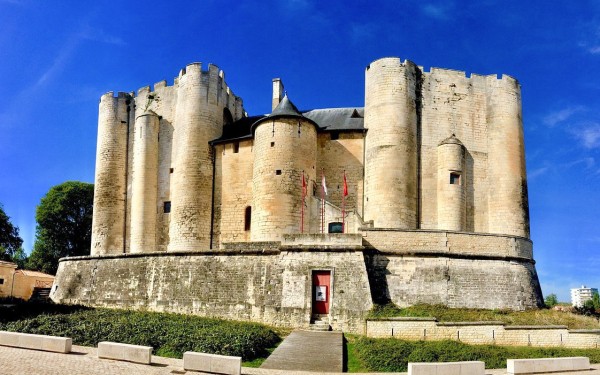 The Donjon, the striking castle of Niort

The Donjon in Niort is part of a medieval castle and the most important monument in Niort. The castle was, at its peak, 700m long and had about ten towers. Part of the Donjon dates back to the 12th century, when construction was started by Henry II (Henry Plantagenêt) and Richard Leeuwenhart. Henry II, king of England, had gained a lot of control in France due to his marriage to Aliénor d'Aquitaine who had divorced the French king Louis VII three months earlier. The Donjon has two square towers of 23m and 28m high which were connected to the main building during the 15th century. These days, the rooms in the main building are used as a museum. From the towers you can enjoy a beautiful view over Niort. The Donjon is one of the largest castles from this period which is still standing in France. The Romanesque fortification is also considered one of the most beautiful in all of France and was given the status of a historical monument in 1840.

The various old churches in Niort are definitely worth a visit. The most important church is the Notre-Dame from the 14th century. Thanks to its high spire, it is the tallest building in the Deux-Sèvres department. The Église Saint André is also a beautiful medieval church which is easily recognizable due to its two high symmetrical towers. The church of Saint-Florent is known due to its unusual engravings in the church walls. The Église Saint-Hilaire de Niort is also stunning and, as the name implies, was built in honor of Saint-Hilaire. 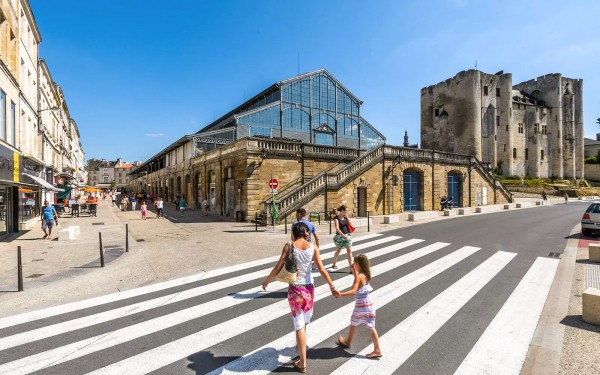 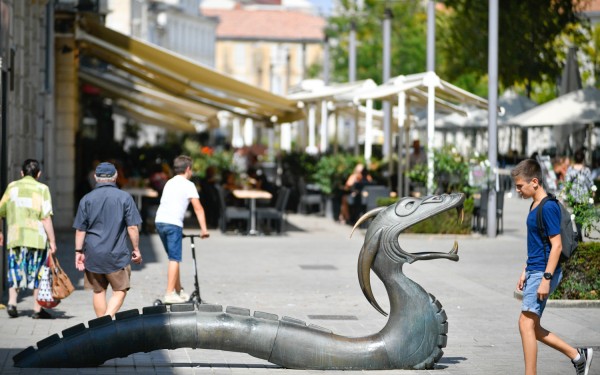 There are four bronze dragons in the main shopping street of Niort. The dragons refer to a legend of which many different versions are going round. The most famous dragon legend dates back to 1692. According to the legend, the city was terrorized by a giant snake with wings that devours children, women and men with one bite in 1692. The dragon sat on Notre-Dame and drank water from the Sèvre Niortaise. No one dared to fight him until a convicted soldier, Jacques Allonneau, stood up and took action into his own hands. He stabbed a sword in the dragons’ neck. In a final convulsion, the dragon fell on top of Jacques Allonneau and both died.

Angelica, THE regional product of Niort

One of the most famous regional products in Niort and the surroundings is "Angélique", also known as angelica. Except for in a small area in auvergne, angelica only grows in Marais Poitevin due to the mild climate and wet soil. The plant can become around 2m high and all parts of the plant can be used. It is processed in tea, oil, soap, liqueur and sweets. The Normans brought the plant from Scandinavia, before that time it was unknown in the rest of Europe. The plant is said to have a medicinal effect. At the beginning of the 17th century, it  is even said to  have protected the inhabitants of Niort from the plague, seen as far fewer people died in Niort than in other parts of France.

The Pilori, which means "pillory", is a beautiful building from the 14th century and can be found in the middle of the historic city center. Pilori is the former town hall and was built in Renaissance style. During the Middle Ages, this places was where lawbreakers were exhibited on the pillory. The entire building, especially around the doors and windows, is covered in decorative masonry (brickwork). These days the Pilori is used as an exhibition space for local artists.

Niort has  been nicknamed Green Venice thanks to the Marais Poitevin, a large nature reserve west of Niort. Marais Poitevin is a regional park with rivers, ditches and streams. You can view the swamp by boat. The area is famous for its wide variety of fauna and flora.

Festivals are organized often in Niort, especially during the summer months. Every Thursday in July and August, the Jardins du Moulin du Roc hosts "Les Jeudis de Niort" festival. This is a summer event with modern music.