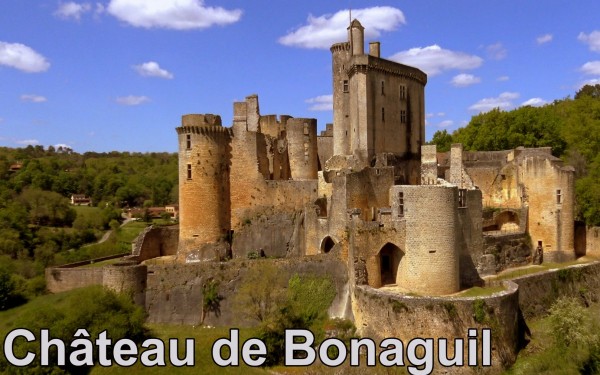 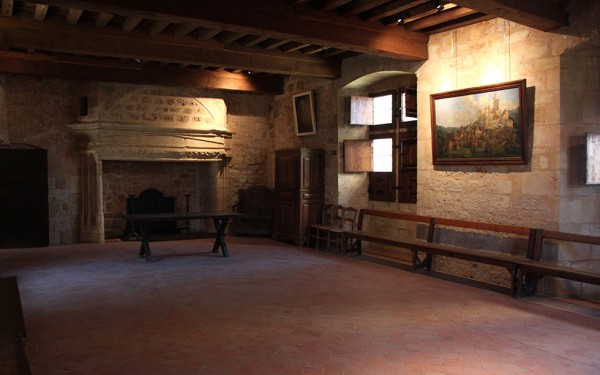 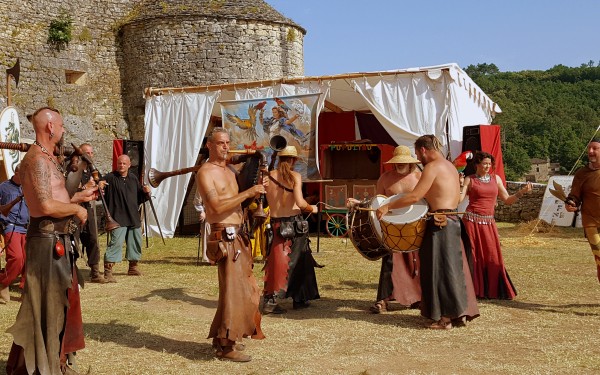 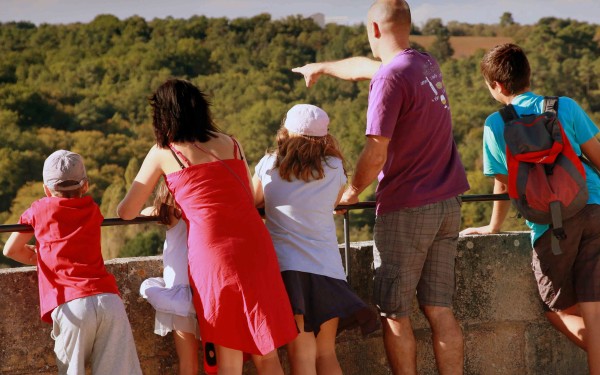 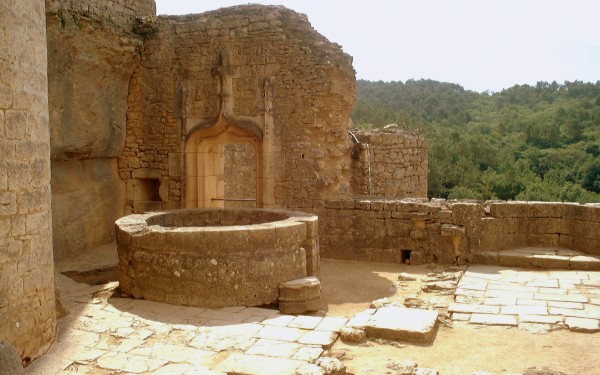 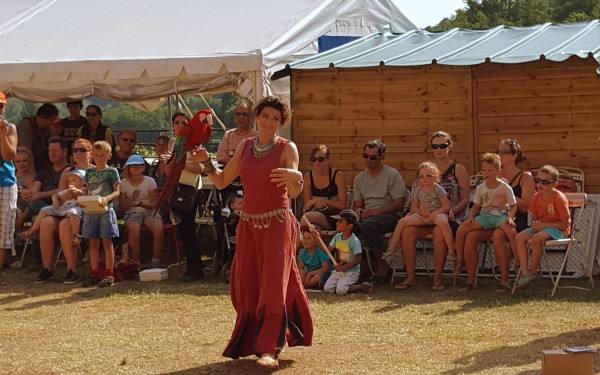 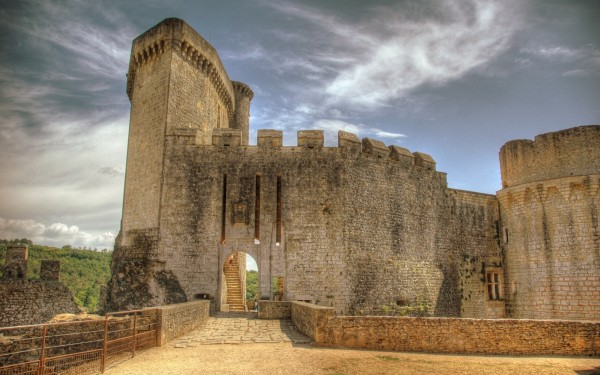 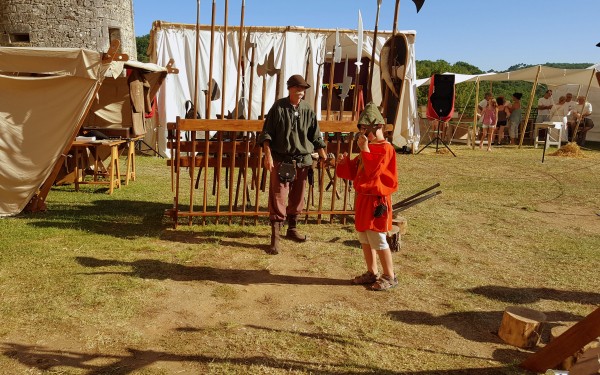 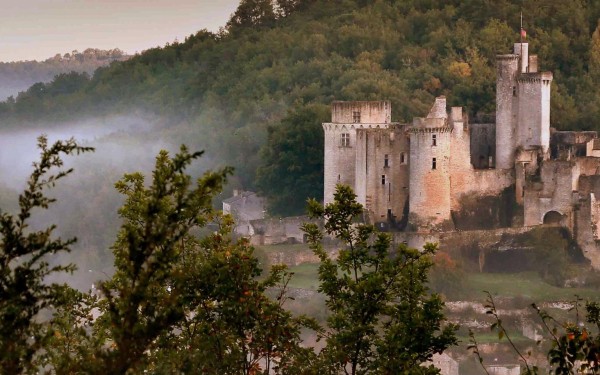 The Château de Bonaguil is a beautiful castle on the border of Quercy and the Perigord. It is located within the borders of the municipality of St. Front-sur-Lémance but is owned by the neighbouring municipality of Fumel in the Lot-et-Garonne department.

The castle Bonaguil was built in the 13th century on a so-called aiguille creuse (= hollow needle) formed by rocks. An excellent defensive position: a steep, rocky projection, perfect for building a castle. It soon became known as bonne aguille (good needle) hence its final name Bonaguil.

The History of Château de Bonaguil

The castle was built in the 13th century and was further expanded at the end of the 15th and the beginning of the 16th century by Baron Bérenger de Roquefeuil.
This Bérenger came from a powerful family from the Languedoc. He was also Baron of different areas and Count of Naut. He decided to convert the ruin into a fortified fortress. It took 40 years to build a double ring of walls around the castle with 6 high towers.
In the 18th century, the castle came into the hands of Marguerite de Fumel, who rebuilt it into a more habitable castle.
One hundred years later, after the French revolution, it was sold to the municipality of Fumel.

One of the most beautiful castles

Bonaguil is a wonderful example of medieval architecture. The castle is known as one of the most beautiful castles in France. A visit to this castle offers a unique insight into the transformation that castles have gone through over the centuries, caused by, among other things, the invention of gunpowder and the rise of the artillery.
The donjon, towers and turrets, barbican, chicane, casemates, cannon holes, drawbridge and canals all testify to it. The guide will tell you all about it during the tour.

The castle sits atop a hill and can be easily seen from the road up to it. Try to park on top of the mountain, then you'll be close to the gate. You should be able to park there in the off-season.
You will enter via the Ravelin (also known as the Barbican). This is a semi-circular stronghold as a defence between the inner and outer drawbridge. One bridge was lowered only when the other bridge was raised!
Walking further along, you will see fortified walls, parts of collapsed rooms with fireplaces halfway one of the collapsed walls. There are round towers with viewpoints over the valley and loopholes or arrow slits at different heights.
A castle built on rocks has the advantage that when a space was cut out of the rocks it could act as refrigeration, but a disadvantage was that the well had to be cut to a depth of almost 50 metres before they reached groundwater. By then you have quite a castle and you have an independent supply of water during a siege.

The Donjon is located centrally in the gigantic building. The Donjon is the part that is shaped like a ship. It is the masterpiece of the defence system.
Six rooms on three floors and on top of that a terrace with a view over the whole region. You have outstanding views of the beautiful landscape. From this point of view, there is also a nice overview of the castle.

At the foot of the castle is the chapel of St Front sur Lémance, where both Bérenger de Roquefeuil and Marguerite de Fumel are buried.

Activities at the castle

A variety of activities are organised at the castle. In July there are the medieval festivals "Les Médiévales Bonaguil-Fumel". There are also demonstrations of old crafts. In August there is a big festival in the castle and the theatre.

A visit to Bonaguil is absolutely worthwhile and a fun family outing. It offers an interesting insight into life in the Middle Ages!

Nice!
Beautiful castle. Well preserved. Also nice to visit with small children. Parked down in the village. Walking upstairs with a stroller is not possible, use a baby carrier for the little ones.

Wonderful castle!
Beautiful old castle of which much is still intact. Excellent description including a route through the castle so it will really come alive.

Magnificent!
You can clearly see how life used to be in the castle, cosy places to get something to eat and drink near the castle, worth a visit.